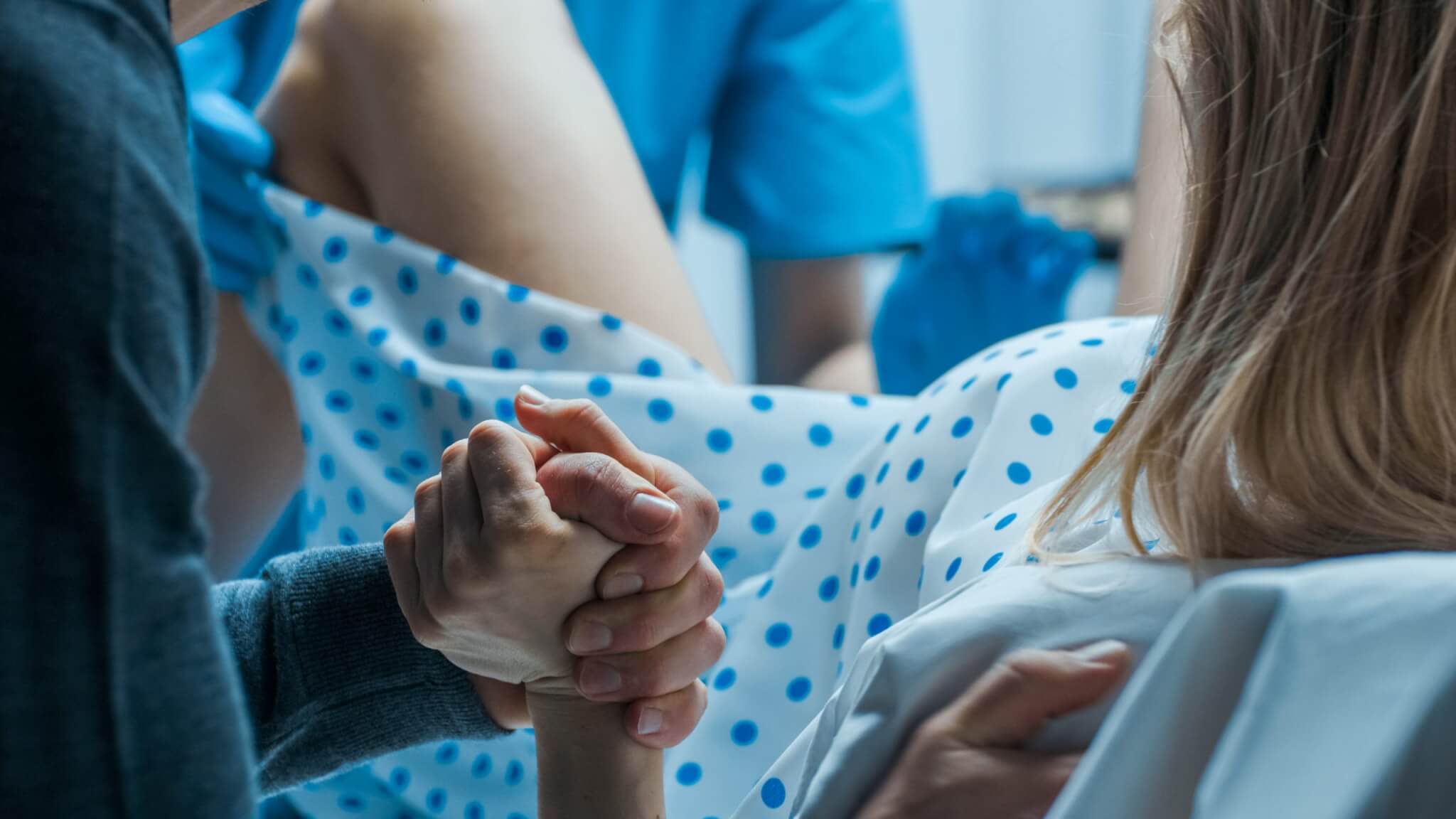 What is Epidural Analgesia and how does it work?
An epidural analgesia is a method of pain control used during the childbirth process to control the mother’s discomfort without causing total loss of feeling or movement.
The epidural space is outside the spinal canal and is normally filled with fat, connective tissue and blood vessels. The nerves that carry the feelings of childbirth pass through this space as well.
A small plastic tube (called a catheter) is placed into the lower back into the epidural space. A local anesthetic medication (freezing) is given through the catheter and into this space. This drug then affects the nerves and blocks the pain. The catheter is left in place until delivery as more than one dose of the drug may be needed before the baby is born.  In most cases, a small machine is placed at the side of the bed and delivers more freezing continuously.
Does it hurt to have the epidural catheter put in?
It hurts less than a contraction. A local anesthetic (freezing) is used in the skin around the place where the catheter is placed. There is usually some slight discomfort at this spot.  More pain may be felt if a problem occurs while the catheter is being put in.  Sometimes a short, sharp pain is felt if the needle or catheter touches a nerve during insertion.
Will labour be slower because of the epidural?
An epidural has little effect on the early stages of labour. The mother is often more comfortable and less fearful because of the pain relief that the epidural brings. This comfort for the mother may even lead to better coordination of contractions and therefore labour may be faster.
Does the epidural affect the delivery?
An epidural analgesia can affect the amount and strength of the “pushing” during the second stage of labour. Although forceps are not always needed during delivery, forceps are more often required with an epidural. This is because there is decreased feeling in this area and so the mother is not able to “push” as well.
Does an epidural cause backache afterwards?
No, the childbirth process itself usually causes backaches because the ligaments in this area need to stretch for the baby to be born.
If I cannot feel how will I know that I have to go to the bathroom (urinate)?
A catheter is almost always inserted into your bladder when you have an epidural. This is because there is decreased feeling in the area. It is important that the bladder be kept empty as a full bladder can affect labour and may even cause damage to urinary system during delivery.
Can an epidural cause permanent nerve damage or paralysis?
Modern anesthetic drugs given into the epidural space do not cause permanent nerve damage. Bladder problems and leg weakness are sometimes experienced after delivery but this has nothing to do with whether the mother had a epidural or not. These problems are usually due to the pressure of the baby’s head and body on the mother’s bladder and on the nerves to the legs. Problems causing permanent effects are very rare.
Who should not have an epidural?
Are there other cases where an epidural may be more difficult or risky?
Yes, there are two cases in which epidural analgesia is possible but special care must be taken because of medical reasons.
If you have any other questions about epidural, analgesia please be sure to discuss them with your doctor.
Will I be completely comfortable?
The amount of pain relief provided by the epidural can vary from person to person. This is because every person is different and some people may be more sensitive to the drug. In addition, the placement of the catheter could be slightly different form person to person, and so, the drug may work better in some cases than in others.
Some discomfort may remain and often a feeling of pressure is present a delivery. If the labour is long, the drug may start to wear off and extra doses of the drug may be needed.  Many patients have complete relief of their pain.
Epidural analgesia does not always work. Some people do not get enough pain relief, and even if the catheter is moved to another spot, some pain is still felt.
How long does it take for the freezing to work?
Once the drug is given, it takes about twenty minutes to work. A tingling, warm and numb feeling is felt in the mother’s legs and lower back as the drug begins to work. Weakness is also experienced in these areas. Many mother experience some shivering at this time, which is also an effect of the drug.
Is there a special doctor who looks after the epidural analgesia?
Yes. The doctor who is trained to give an epidural is called an anaesthetist. The anaesthetist cares for all patients in the hospital who require spinal analgesia. The anaesthetist may be in the operating room or with someone else, and so sometimes the start of the epidural may be delayed.
It is very important that certain tests be completed before the epidural is started and this may take a little time. The testing required prior to an epidural, is blood work and starting of an intravenous(IV).

Is there any danger for the mother?
An epidural analgesia is a relatively safe procedure. If the mother is healthy, there is very little chance of a major problem causing permanent damage. HOWEVER, as with any anaesthetic or procedure there is always a small risk of complications no matter how carefully it is done.

What are those complications?
Is there anything that the mother should do to help prevent these problems from happening?
It is very important for the mother to follow instructions very carefully during the insertion of the catheter. Movement during the insertion of the catheter can cause it to be placed in the wrong spot. The mother must sit as still as possible while the catheter is being inserted.
The mother is to remain on one side or the other until delivery as talked about above. She MUST not attempt to get out of bed.
Having a baby at STEGH