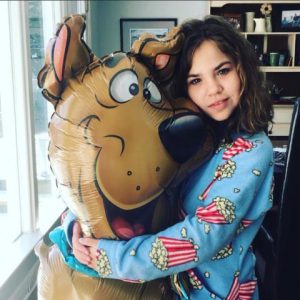 At just four years old, Kennady Stone received a liver transplant. It was a day that changed her life; a day that the Stone family thinks about every April during Be a Donor Month.

When Karen Stone became pregnant, she was unaware that she and her husband (Blair) both carried a recessive gene for a rare metabolic disorder known as Methylmalonic acidemia, or MMA.  After giving birth to a healthy baby girl, it took less than 24 hours at home to know that something was terribly wrong. While in the Pediatric Intensive Care Unit, Kennady was diagnosed with MMA, a condition that occurs in an estimated 1 in 80,000 people. MMA is an inherited disorder in which the body is unable to process certain proteins and fats (lipids) properly.

Because of her metabolic disorder, Kennady’s body had to fight extremely hard to handle infections, which resulted in many hospitalizations throughout the first few years of life.

At the age of three, Kennady was having more metabolic crises; she was hospitalized six times over a period of four months. Each hospital admission resulted in a week-long stay, at minimum. When signs of neurological damage during the crises became evident, the doctor presented the option of liver transplantation, which Karen and her husband viewed as the only option for Kennady.

“Twenty years ago, kids with this type of disorder would not survive,” says Karen. “The option of having a transplant can help to prevent severe neurological damage and improve quality of life for longer periods for kids with metabolic disorders.”

At four years old, Kennady was placed on the transplant list; a wait that they were told would be at least one year. Karen was going through the process to become a living donor when, five weeks later, on September 17 at 9:30PM, they received the call.  “We weren’t prepared,” recalls Karen. “But, how does one prepare? Twenty minutes later we were on the 401 heading to SickKids in Toronto.”

Kennady was the first child with her specific gene mutation to have a liver transplant at SickKids. The gift was bitter sweet. The liver she received was from a four-year-old donor. “The worst day of that family’s life allowed us to have our greatest,” says Karen.

Karen and Blair stayed with Kennady in Toronto. It was an emotional recovery as they dealt with several infections, rejection, and painful physical therapy, while trying to celebrate the many wins; none of which Kennady was able to understand at the time.  After what felt like the longest month of their lives, the Stone family returned to London where the team at LHSC took over Kennady’s care.

Fast-forward seven and a half years. Kennady is now a bubbly, happy 12 year old who loves to act and sing. An incredible team at LHSC follows her closely. When she grows up, she wants to work with animals.

In the seven and a half years since transplant, Kennady has only had to spend a single night in hospital. Although doing really well, Kennady will be listed for a kidney transplant in her teenage years as her metabolic disorder and medications continue to damage her kidneys.

Karen and Blair are forever grateful to the family that gifted their daughter’s organs and gave Kennady the improved quality of life that she would not have had otherwise. “Talk to your kids about organ donation,” urges Karen. “Kids are incredible. It’s a difficult thing to think about, but you could be in the position to grant a miracle someday.” Truly, the gift of life.

Learn more about how you can register to be an organ and tissue donor: www.beadonor.ca